An excerpt and translation made from Ricardo Martinez Esquivel´s article ¨Modern sociability: Secret Fraternal Societies in the Caribbean, Costa Rica in the late nineteenth century¨ by Javier Martín. Photography by Carl V. Hartman

Cosmopolitan was the term to describe Port Limon since early moments, and really in a big way compared to the rest of Costa Rica during those times. This is the port found on the Caribbean coast of Costa Rica.

When Limon was a young city, when the railroad started carrying coffee from San Jose down here in order to ship it abroad, the construction of the railroad and the international trade brought not only merchandise, but people from many different locations and cultures, (Italians, Chinese, Jamaicans in big numbers, plus people from India, New Orleans and other Caribbean islands in smaller amounts).
By that time inhabitants of the city spoke Creole English, French´s Patois, Dutch and Spanish. Such a combination of cultures gave Port Limon a liberal and progressive profile. As a matter of fact there was journalism done in Port Limon on English, Spanish or both languages. 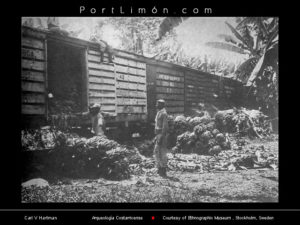 By 1890 Port Limon is undoubtedly a multi-cultural space where different ethnicities interact; this cultural heritage defined the traditions, consumer habits and forms of sociability in this city, quite the opposite as happening in the capital San Jose and the rest of the country, where isolation had established a kind of enclosed culture. These immigrants brought new ideas of fraternity which were a result of the French Revolution. It was because of this multicultural ambience established in this city, that it was possible for some men to found the first fraternal secret society known as ¨Knights of Pythias¨ as early as in 1889.

Belonging to the ´The Supreme Lodge Knights of Pythias, North and South America, Europe, Asia and Africa¨ fraternal society, this last was kind of a copy from the original ¨Order of Knights of Pythias¨ who never accepted members from other phenotypes rather than white Caucasian until 1956, and that was founded in Washington DC in February 19th 1864. This was the first fraternal organization acknowledge by the Congress of United States of America in May 5 1870, so the latter one was established as the only way of allowing other than Caucasian -like afro descendents- to participate and gain benefits from such kind of fraternal organizations.

These kind of secret social-fraternal organizations were born in Europe during late 16 century. In various forms, all these organizations share moral values and metaphysical ideals which include the statement of the existence of a superior being regardless the religious belief you were born in. Probably the oldest of these societies is freemasonry, so it's generally used as the reference for describing the rest of these societies -which is not very accurate- but it's true that all of these groups follow the same Masonry scheme of: secret rituals and symbols, similar ideas or beliefs and a similar hierarchy, which is based on the establishment of a fraternity group that meet in a lodge, a place where to practice their rituals.

The three basic concepts of Freemasonry are: Believing in the Great Architecture of Universe*, to love one's neighbor and belief in the immortality of soul. For the members, the participation in the fellowship means a moral commitment and a constant intellectual development towards itself and helping others. The lodge promotes philanthropy and tolerance.
The Knights of Pythias in Port Limon was a kind of worker´s mutual benefit society mostly formed by railroad workers, in a time where the Costarrican government had very few social programs for the working population, and solidarity among persons was probably the only way to solve hard problems of life like funerals and others.

About the people who established this lodge we know nothing, but according to Fernando González this lodge was lead by a young man from Bluefields Nicaragua.
To this point we must say that this lodge had a big number of Negroes but was not only for afro descendents, it was open to all phenotypes, but because it was created by railroad workers, these were mainly Negroes.

Later, in November 8th 1891 the first freemason lodge was established in Limon and named Fraternal Union, established by the Spanish José Serratacó y Andrés Perez, the Cuban Luis Perozo, Osman Nuñez y Julio Da Costa, this is a good example of the multicultural approach that has being part of Limon´s idiosyncrasy because this lodges was formed by many different kind of persons, actually its meeting were lead in English and Spanish, where Moritz Sasso and Joseph Samuels were translators. Some years later (1899) a new branch was established for those who spoke English and was named Phoenix Lodge, founders of this last lodge were Segismundo Braida, William Dalzel, D.C. de Mercado, H.M. Field and Max Lesser from U.S, Cecil Vernor Lindo from Jamaica, Esau Lyon and Alex de Marconay from England, the Danish Moritz Sasso and the German Gustav W. Titzck. These two Masonry lodges joint 159 persons during those years.
Records show that nationalities of participants in these freemason lodges during last decade of 19th century were in relevant order:
Costa Rica, England, Cuba and U.S. in a big amount, while in smaller amounts: Italy, Colombia and Spain, as interesting cases are those registered as Salomon Esna and Horacio Alem Aiza from Lebanon, and the Chinese Juan Gondres.

The mayority of members from these masonry lodges; Fraternal Union and Phoenix were business men related either to banana or to the importation of merchandise for commerce and agriculture, but in the records we also find professionals in different fields like attorneys Mauro Aguilar, Francisco Rodriguez and the Cuban Daniel Alvarado, bankers like the British brothers Esau and Ysaac Lyon (Anglican-Sephardic Jews), the U.S. citizen Harry Zurcher, and physicians B.C Nuñez Villavicencio (Cuban)and Giuseppe Brunetti Felix (Italian). We also find who are carpenters like Jamaican afro descendent protestant James Henry Lucas, bookkeepers Miguel angel Salazar and the Colombian cook Reinaldo Antonio Jurado.
In the masons lodges of Port Limon we find adepts of different religions like Catholics, Anglicans, protestants and Jews. The case of Jews is very interesting because they have Sephardic origins, a topic that needs to be studied deeper among so many ethnic immigration webs that arrived to Port Limon from Caribbean islands. Among these Jews we find: A.R. Mendez, Joseph Samuel, the Danish business men H. Moritz and J.S Sasso, the brothers Isaac and Osmond Levi Maduro Lindo, sons of the Danish business man Moses Levi Maduro (who arrived from Saint Thomas and was raised in Curacao like the Sasso as well) and the sister of Stanley, Cecil and Percy Lindo Morales.

The Lindo Morales were also Sephardic Jews and active masons in Port Limon. There were about ten brothers born in England but had adopted the Jamaican citizenship. Due to the banana industry many of them went to live to other Central American countries. The Lindo Morales arrived to Costa Rica as Anglicans, Cecil was member of the Phoenix Lodge, while Stanley and Percy were part of the Fraternal Union, Stanley actually became great master of the Great Lodge of Costa Rica between 1937 and 1941.

In other hand we see a very interesting fact that proofs the progressive mind of such lodges, during this period of time the government took not enough care for the public health in Limon, a group of masons took control and made a hygienic campaign and established a health care system for the population, these was done by Felipe J Alvarado, Cecil Lindo, Roberto Jimenez, Juan Fernandez Moreno, Hilario Restrepo, Snider Petencier, the Colombian Bienvenido Gudiño and the Spanish Napoleon Santera Cuevitas. Besides that, the fraternal Union hired a doctor named Cespedes.

Finally we must say that these fraternal secret societies had good relationships between them, regardless they belonged to different lodges, We know that Segismundo C. Braida from U.S. member of Saint John´s Lodge in Greytown, Nicaragua, used to be part of the sessions at Phoenix Lodge. We also know that when Knights of Pythias ended activities Fraternal Union started to use their ritual instruments, as it was registered in the meeting during November 23th 1899, where a letter wrote by Charles Wilford Grant Keer was read in that session, and asked the ritual artifacts to be returned to them because they were planning to re-open.

In other hand we know of an invitation sent to the Fraternal Union from the Shepard´s Lodge Costa Rica established in Port Limon and adscript to the Royal Shepherds Sanctuary Benefit Society. This was an invitation to participate in the establishment of their functionaries and the declaration of their lodge which happened in the meeting of the August 13th 1894. José Arrasty the Cuban Venerable Master gave permission to participate in the meeting. About these lodge, Guzman has said that it was ¨Black masonry¨ but we think that even though there are similarities between Shepherds and Masonry, this are two different orders, and in the other hands there're no evidences of this lodge to be formed of only afro descendents.

Port Limon by 1890 is a multicultural space of ethnic interaction. Diversity of cultures is what defines then the traditions, consumers' patterns and sociability's forms of this place. As main characteristics we see Port Limon as Cosmopolitan, liberal and progressive city.

The participation in this fraternal secret societies aloud people to be part of a modern way of socialization and association in a corporative and with a hierarchy. In these societies there was no ethnic, economical or religious intolerance. They gave to their members a possibility of accessing the association's ideals of fraternity, progress and personal development.

Finally we want to call the attention on the fact that we can´t talk about a Black or White masonry in Port Limon because, what we have as evidences are opposite to this conclusion. What evidences show is a good relationship between three deferent lodges; Knight of Pythias, Fraternal Union and Shepherds. And we can also say that evidences show that many of these members from these lodges were also members of other patriotic and religious organizations.
Memorias, Año 6, N0 11 Barranquilla, Noviembre 2009. ISSN 1794-8886

*Archetype that, depending on each person may represent, ¨the only God¨, ¨the superior being¨ etc.