END_OF_DOCUMENT_TOKEN_TO_BE_REPLACED

Bromeliads are a clear example of biodiversity in Costa Rica, they´re present in most of life zones found here, their variation in color of foliage and inflorescence is enormous, with the ability to adapt to different environment conditions as well.

These are epiphytes plants, this means they are plants anchored to branches of trees but they are not parasitic, they are taking nutrients from rainfall and from some sort of aerial plankton that floats in the rainforest canopy, this last one is formed due to decomposition (and transformation into dust) of so much different forms of vegetative life that literally covers all trees in the forest including moss, lichen, club moss, ferns and many others.

Bromeliads are one of the most evolved forms of plants, their capacity of living without soil is an impressive adaptation to the environment, one strategy they have to resist desiccation is the presence of thousands of tiny scales covering their leaves which act as mirrors reflecting most of the suns light and by the way avoiding also the heat from where desiccation may happen.

It’s interesting to observe how their reproductive system is based on the fact that they live in trees trying to get close to the canopy where more sunlight happens, this includes having seeds that are very light and dispersed by wind.

The easiest way of finding out if the plant observed is a bromeliad is when you see that such a plant is formed by a kind of crown of leaves, exactly like the leaves present in pineapples, pineapples are bromeliads that have being modified by humans during millennia and are now growing in the ground, and producing for us it´s unique tasty fruit .

Many of the bromeliads hold rainfall and form kind of little water-tanks, inside, many different forms of life (insects, lizards, frogs) live part of their life cycle -if not their whole life- . If we could put all these little water-tanks together , we will understand that these is a small ocean that hangs at the canopy making out this environment not only an aerial but also aquatic kingdom, that´s why we now can tell that 70% of the biodiversity in a tropical rain-forest happens at the tree tops.

*TIP:
What to bring in a Limón rain forest tour: 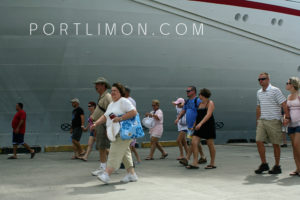 Happy customers on their way to a Port Limon's shore excursion

Even though the number of tours in Costa Rica is big -due to such a big diversity of climates and life zones- the number of Port Limon's shore excursions is reduced due to the limited time customers have while at Port Limón. 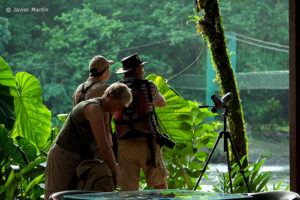 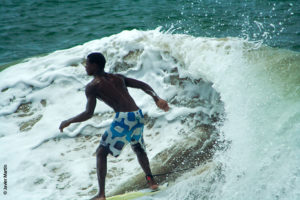 Temperature in Port Limón es always warm or hot, humidity level is usually above 75%, currency is costarrican colón, and exchange is actually ¢545 colones per one USD. (as in November 14 2016). 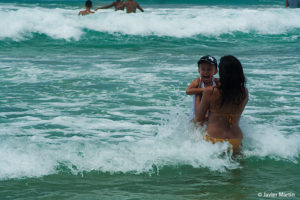 Well known for a long lasting democracy and a lack of army, Costa Rica stands for human rights, as an example, as soon as you step in Costa Rica (in our case in Port Limón) you have the same rights as any costarrican, excepting vote, for that you must apply for a costarrican citizenship, then you can vote. 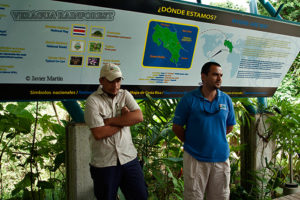 Ask our sales representative, for information among our tours in Port Limon.

*TIP:
What to bring in a Limón rain forest tour:

Calathea is a genus part of Marantheaceae family, related to bananas and heliconias, marks a difference the presence of a pulvinus connecting the leaf with the stem. This pulvinus, aloud a broader range of movement so the leaf acquires a bigger amount of sunlight through out the day.

This was the original source of material for wrapping a pre-columbian meal known as Tamal, it was also used for covering dead bodies as part of a funerary ritual of some ethnic groups, now days tamales are wrapped with banana leaves because they are more abundant.

Many species in this genus present a whitish to silvery pubescence under the leaf, no known yet by science it such pubescence has any function serving the plant.

In the sequence of images shows how breaking the central vein of the leaf, then this folds in itself and ready, we have a cup in order to pick up water from a spring or creek.