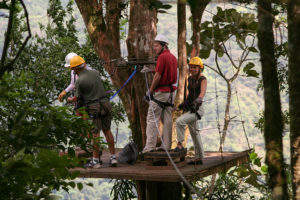 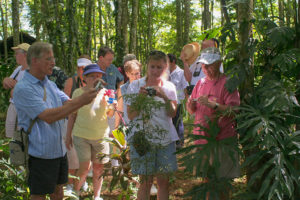 Perfect Private tour for 2 (arriving via cruise ship)
After scouring the internet for reviews of tours for an upcoming day trip via cruise ship, I found Port Limon. After several emails back and forth with Jorge, my husband and I settled on a tour with just us 2. Jorge was very easy to deal with and gave us lots of options, we followed his advice and planned the - Full day (6-7 hour) Ecological tour

1) Veragua Rainforest Eco-Adventure. Sky Gondola-Aerial tram- Puma Waterfall, Rainforest Trail, Snakes Exhibit, Butterfly World Frog Habitat, Biological and Research Station.
2) Tortuguero National park ride boat. We will be looking for the real wild life in a wonderful canal, where you be able to spot wild animals like are: Monkeys, Sloths, reptiles, several kind of birds and much more! All this in their own natural lush! One hour ride boat in the canal.
3) After Bonita beach where you will be able to enjoy our traditional local food.
4)At the end a small city tour ending at the best supermarket where you can get the best costa rican coffee and much more.

Our ship (Celebrity Reflection) arrived, and it took a bit longer to disembark due to weather/water conditions, but we were the first off the ship.
We read the directions on how to meet Jorge, but it was a bit of a walk, and you actually have to LEAVE the port to get to the main street (we were initially a bit confused on this, but you go through the gift shops, and out through this turnstile gate and there were tons of folks standing on the street)
We sent Jorge our photo, and he sent us one of him, so we kind of knew who to look for, but in the mass of people we didn't see him. He came right up to us and said hello. So the photo helped!
He had a nice Toyota Corolla waiting for us, and we were off to the rainforest.
Very pleasant man, super good English and easy to understand, he answered our questions along the way.
We got about 30 mins away from the ship, when Jorge got a phone call. This phone call was from a friend of his at the pier, letting him know our ship had pulled the gangway and wasn't sure what was happening. Jorge let us know this, and we decided to turn around not knowing exactly what that meant.
Each night, I take a photo on my phone of the port authority info, for worse case scenario if we get left behind. And I found that number, and Jorge let me use his phone and I called. The man that answered did not speak English, and I asked for someone that did, and they didn't have anyone there that did! Jorge said he'd be happy to speak to them, and we pulled over and he talked to them asking what was going on with our ship.. They explained they didn't know. So, we drove back. So thankful that Jorge had a friend that was watching out for this since we were on a private tour, that is always a worry. No need to worry with Port Limon tours, they are on it!
The entire drive back, we never passed a single bus. Jorge said, normally they'd have passed 20 buses, so we knew something was up.
We finally see our ship in sight, so we were relieved that it was still there! ALL the shore excursion buses were still there too, so we know something was going on. Jorge dropped us off right at our ship, and we went to ask someone what was going on.
We got 2 men who looked like they had higher ranks, and noticed they were just starting to let passengers off the ship. We explained the scenario and they said, the swells were high, and as a result, the gangway wasnt secure enough and a crew member was injured trying to get off the ship, so they pulled the gangway to make sure it was extremely secure before letting anyone else off the ship. They assured us that they were not leaving until the assigned 3:30 as they planned and that we could go ahead on our tour knowing we'd be ok. (I also explained we called the number given in our daily planner for the port authority and that they had no one there that could speak English, and they were surprised to hear that, but didn't really seem too concerned..I was however, very concerned, but thankful it wasn't a real emergency as that would have been useless for us!)
We told Jorge, and we talked about it, since so much time was lost with driving back and forth, the plan had to be modified. We ended up doing 90% of the original tour, but more laid back and easy than if we'd tried to cram it all in.
Personally, I LOVED the boat ride, we saw so much stuff! We saw the cutest sloth hanging in a tree, upside down and he flipped his head back and sort of smiled at us, getting THE BEST photos ever possible!
We also got to spend alot of time with Jorge, and he absolutely made this one of our favorite stops on this cruise. He brought us to his favorite local restaurant for a local dish where we bought his lunch. The food was fantastic!!! Reasonably priced and in a great location.
We felt 100% personal attention, he listened to everything we wanted and made it happen. Some things even on the fly. He has a very relaxed way about him that makes him easy to talk to (which we knew already via emailing before the cruise) and it was evident his love for his country.
This tour was reasonably priced, especially for just the 2 of us. No big bus tours for us!
Jorge even spotted along a highway of sorts, a family of monkeys, so we stopped and got out to watch them for a while. Then, noticed a big ole sloth was there too.
He knew all the best spots.
If you are learly, like most are, of a private non ship tour, this experience made us feel so secure. Knowing there are people keeping an eye out just in case something was to happen with the ship, and alerting us when there was something going on, to us, was priceless.
We had piece of mind the whole day. We knew we were in good hands 🙂
We now are happy to pass on this info to you all so you can rest assured if you're doing a day excursion via cruise ship, this is the way to go!
Tell him Tammy sent you..